Home  ›  Articles  ›  The Generosity of Spirit: A Breakthrough
Quote.

Everyone has experienced a shared moment, when two people are having the same experience. Expand the moment into something continuous, and you have the experience of being in love. But there is also sharing when you feel empathy with someone else, as when you feel sorry for a child in distress or the victims of violence.

Nothing seems strange about shared moments, yet nothing about the human brain can explain how it happens. In the mainstream view of the brain, a mechanical physical process is totally necessary in order for brain cells to “talk” to each other. A storm of electrical charges and chemical reactions fills our heads, which seems totally obvious. But when you share a moment with someone else, something is going on outside your head. This is a huge contradiction, because having a brain outside your head is impossible.

To the rescue comes a phenomenon known as “brain synchronization,” which is outlined in detail in a fascinating article at the Discover magazine website. It has been known for decades that when people are physically close, their biorhythms tend to go in lockstep. We match steps when we walk with a friend; breathing and heart rate become similar when two people share a bed.  So it wasn’t entirely surprising that when a team works on a creative problem, the members of the team experience a unity of purpose reflected in their brain waves. A pilot and copilot of a commercial jet will experience brain sync when they have to cooperate during takeoff and landing, but during the flight, each returns to his own separate brain activity.

The brain sync phenomenon rescues mainstream notions about the self-contained brain by allowing for two or more brains to fall in line with each other. But if you look deeper, the rescue mission is not only a failure—it deposes traditional brain science. The hidden mystery of brain sync is that something, some kind of signal, must in fact travel outside the head and enter the consciousness of the other person. There are no physical signals that fit the bill. The brain’s electrical field isn’t a workable answer, because you can sync with someone else on Zoom, where there’s no physical proximity.

The most cherished assumption in neuroscience is that Brain = Mind, because if you abandon this assumption, Mind is free to go where it wants, even though Brain can’t go with it. This is exactly what happens in shared moments. The minds of two people share an experience outside the brain. A skeptic might argue that subtle signals are given off, such as facial expressions and tone of voice, which trigger the shared experience. But such isn’t the case between pilot and copilot or in the brain sync exhibited when a whole team cooperates on a project.

What is actually happening is the sharing of consciousness, which explains what it means to be generous of spirit. We are constantly sharing our consciousness with others; it actually takes an effort to freeze someone out, which involves keeping your consciousness tightly wound and contracted. Generosity of spirit is real, and we experience it in shared moments of love, compassion, and empathy. We experience it sitting in a movie audience sharing the same enjoyment of a film. Once you examine it closely, shared consciousness influences how videos go viral, how whole societies share a unique character (the difference between the French and the Germans), how tribalism binds people, how folk wisdom persists and religions spread.

Much more than shared attitudes is involved, and the sharing goes far beyond information, facts, and the news, which gets shared in concrete ways like social media and school systems. Generosity of spirit is the sharing of meaning. You can define meaning any way you want. It can be a purpose, as when a team of climbers ascends Everest. It can be a shared faith in higher values. Standing in front of a beautiful painting like the Mona Lisa, the sharing transcends time as Leonardo’s spirit communicates itself through his art.

None of these things can be remotely explained if you stubbornly insist that Mind = Brain. Leonardo’s brain has been dead a long time, but that’s irrelevant. A beautiful painting by a living artist also shares the artist’s spirit. Taken to an extreme, some people radiate presence that is so powerful, it dominates the shared moment. In the West this is called charisma; in India it is called Darshan.

When the generosity of spirit fails us, or we fail it, conflicts develop. Consciousness pulls itself in like a turtle retreating into its shell. Then in isolation all kinds of peculiar, hostile, negative ideas fester “in here.” The violent loner is a prisoner of constricted, isolated awareness that has lost the capacity to share in the generosity of spirit that keeps society going. There are many phenomena that can be understood once you accept that shared consciousness exists.

But there’s one last step to take. If you call a friend on the phone, you and your friend are like radio stations sending signals to each other: you speak, she speaks, and the signals bounce off each other. Or so it seems. In reality, you are both living inside a field of consciousness that is like the field of radio waves engulfing the whole planet. The field of radio waves must exist before two stations can send signals. Sitting in a control booth, a disc jockey or announcer isn’t aware of the whole field. He’s only aware of the signal, or broadcast, being sent right this minute.

This single truth opens the door to all higher states of consciousness. The source of the highest values in life—love, compassion, creativity, inspiration, insight, wisdom, and more—is the field of consciousness; therefore, you are the source of these values. Once you realize this fact, you aren’t automatically fully enlightened. Yet without a doubt you stand on the threshold of a journey into the wonder and mystery that beckons all of us, simply because we are aware. 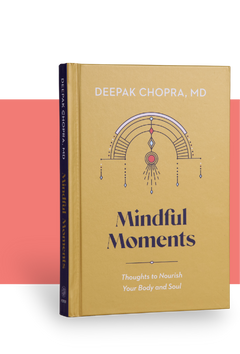 Order Mindful Moments
Thoughts to nourish your body and soul. “Beyond logic is poetry; beyond poetry is music; beyond music is the dance; beyond the dance just love.”
Scroll Up